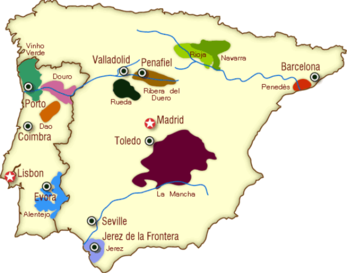 Spain is another country that produces grapes in just about every corner, from the Atlantic Ocean and the Pyrenees Mountains that border France to the north, to the Mediterranean in the East and South. The most prestigious regions, and therefore the most popular for wine tourism, are the Rioja and Ribera del Duero in the North, and the Priorat region to the South-West of Barcelona. We visit these regions separately or as one grand tour across the breadth of Northern Spain - and sometimes combine this with Portugal, Spain's neighbor to the west.

Rioja and Ribera del Duero
Both of these regions are named for their rivers; the Oja and the Duero, which continues into Portugal to become the Douro, along whose terraced banks the grapes for Port are grown.

Rioja starts just 45 minutes South-East of Bilbao (where the famous Geggenhiem museum is located) and runs for a wide, 120 km-long band alongside the Oja. It's divided into three parts: the Alta (highest) in the west, the Basque country of Alavesa in the heart of the region and the Baja, the lowest and warmest part, producing the most alcoholic wines.

Tempranillo is the main component of red wine in Rioja, along with Granacha, with small amounts of Graciano and Mazuelo. For whites the main grape is Viura, blended with Malvasia and Garnacha Blanca. In recent years the beautiful countryside and historic medieval villages of the region have been adorned with many new architectural wonders - the most famous being the Frank Ghery-designed (as in the Guggenheim museum) Marques de Riscal. The new wineries provide exciting visits as wineries invest in state-of-the-art installations, but villages like La Guardia or the "Barrio Estacion" of Haro remain unchanged in their charming and picturesque narrow cobbled streets and history.

"Rioja" classified wine spends less than a year in barrel, whilst "Crianza" must be aged for at least two years, one of them in oak. "Reserva" stays at least a year in oak and two more in bottle, and "Gran Reserva" has to have two years in oak and at least three in bottle. In practice, most of the top producers these days age their wines longer than the minimums. This is sometimes a little confusing for newcomers to the region - especially if they're used to the Bordeaux-style "futures" selling of wines - but it makes for wines that are relatively close to being ready to drink on release, as opposed to top Bordeaux that needs to be aged for several years after release.

Ribera del Duero lies to the south-west of Rioja, with the most important part alongside the river from Aranda de Duero, through Pesquera and on to Valladolid. Somewhat similar in style to Rioja - full-bodied and with great aging potential in the top wines - nowadays they are likewise dominated by Tempranillo, since Alejandro Fernandez started using the grape at his Pesquera winery in 1972. Prior to this Garnacha was the predominant grape. The most famous winery in the region is undoubtedly Vega Sicilia - virtually the only wine known outside the region until the 1980's - but now there are a host of great producers. As in the Rioja, many of the buildings created by today's winery owners are quite stunning, and even better, some have integrated accommodation for visitors, providing unique and beautiful places to stay during your time here.

At the western end of the Duero is the region of Toro, historically making rather rustic wines, but in recent years this area has changed dramatically and is producing more and more fine wines, still at reasonable prices. Close enough to visit from a Duero base, this makes a very worthwhile addition to a trip to this part of Spain. We often pass through this way en route to Portugal, when following a combination Spain/Portugal itinerary.

Easily accessible from either Madrid, Bilbao or even from south-west France, the vineyards of northern Spain offer great wines, history and beautiful scenery, with traditional Spanish hospitality that will draw you in and make you wish you had another few weeks to enjoy the sun, wine and foods of this lovely region.

Best known for its fortified Port and Madeira wines, Portugal has recently begun to make a mark with its table wines. Aside from the "light and lively" Vinho Verde from the north of the country, which has always seen a big production, regions such as Bairrada and Alentejo are making some very fine wines, as is the Port-producing valley of the River Douro.

The heart of the country's wine business must still be the Douro Valley however - arguably the most beautiful wine region in the world. Though there is a wide variety of grapes is grown, the predominant one in the Douro for both fortified and table wines is the Touriga Nacional. Historically, red Tinta Roriz (Tempranillo) and white Alvarinho (Albarino) are the preferred grapes outside of the Douro, but there is growing experimentation now with more "international" varietals as well as a more general use of Touriga Nacional.

So, just as the heart of Portugal is the Douro, this is where our tours are normally focused. The town of Vila Nova de Gaia which looks across the river to the historic city of Porto is home to scores of Port houses - this is where the vast majority of tourists come to sample and learn about Port. We certainly don't ignore these big houses as they are both informative and an important part of the region's history, but we don't generally spend more than a day here.

Rather, we prefer to follow the terraced hillside vineyards as the meander along the banks of the Douro, to the lands that supply the grapes for this uniquely wonderful and decadent drink. Here we relax in accommodations that were once a family's private Quinta (port estate), and indeed is still a producing vineyard. From this base we explore by both land and water, tasting at estates known the world over as well as tiny artisanal producers you may never see again (but only wish you could!).

Some of our tours start and end with Port (often combined with time in Spain) but others continue southwards through the regions of Barraida and Dâo, staying in another Quinta in the heart of the wine country. Apart from the fabulous wineries, you may be tempted by the golf course or a spa treatment before enjoying a Michelin-starred dinner...

And on finally to Lisbon, the beautiful and historic capital where we end (or sometimes begin) our tour. As will all our destinations, we are ready to arrange extensions before or after your Avalon program either within the country or elsewhere - though after your Portugese experience anything else is likely to be a little overshadowed!